The History of Bovet

The History of BOVET

Switzerland has managed to dominate the watch industry through almost two centuries of booms and busts, thanks largely to the leadership of outstanding individuals.

The great names in Swiss watchmaking have invariably been created by men of inventive genius or innate business sense. For many generations these companies drew on family resources to manage their growth, but often the family line ran out, and survival had to depend on outside talent. That new blood is certainly responsible for the thriving presence today of watch names dating back to the 18th or early 19th centuries — not one of them remains in the hands of their founders’ direct descendants.

BOVET is a typical example. Four successive generations of BOVETS managed the business after it was founded in 1822 by Edouard Bovet, himself the son of a watchmaker. But when the BOVETS abandoned watchmaking, the name they created was too valuable to die. Other watchmakers took over to keep up the tradition.

Today, more than a century and a half after Edouard and Alphonse Bovet shared the tasks of creating the company, a new lease of life has been given to the brand by Pascal Raffy, owner and President of BOVET FLEURIER SA, to perpetuate one of Swiss watchmaking’s greatest legends.

In the BOVET tradition, the artistic objective of a timepiece is to trigger that thrill of discovering a new aesthetic expression. But the value of originality can only be sustained by a display of well thought-out and brilliantly executed craftsmanship. Originality also demands taking risks. Like other risk-takers, Edouard Bovet was a visionary when he headed East — to discover that his watches appealed to the hearts of art-lovers at the other side of the world.

The same faith in the universality of good taste takes the BOVET name once again to the society of those who appreciate fine art and watchmaking at its best.

A great watch is a written score, an orchestration, the concerted performance of top players… and a sublime result. In the end, it’s the players that count. Only the best watchmakers can do justice to a perfect design. Access to the finest artistic talents enables BOVET to delight the many people who appreciate the aesthetic of horological decoration in a finely engraved movement, the ripple of a Côtes de Genève finish or the brilliance of an enamel.

Each new model is created to offer the best workmanship available today. Although the standards of the past are a constant reference for the present, the measurement of time compels anticipation of the future.

The watchmakers at BOVET needed to take a bold approach to recapture the strong personality of the brand. The choices were difficult, the workmanship exacting and the technical standards uncompromising. Some pieces required craft skills that had virtually disappeared. Yet today’s BOVET wristwatches have one thing in common with their pocket-watch ancestors — a personality that arouses every reaction except indifference. Collectors see it immediately in the antique pieces, and sense it in the harmony of form and superb finish of the contemporary wristwatches.

FLEURIER, the Garden of Swiss Horology

The Romans named it for the spring flowers painting the banks of the three streams that water its pasturages. Though the flowers still bloom in FLEURIER, the name of this valley community in Switzerland’s Jura canton of Neuchâtel today refers more to flourishing business than to floral abundance. In the early 19th century FLEURIER was a fair-sized village of about 100 dwellings and 800 inhabitants. It was already known for its lace-work, but by 1820 a new activity was taking over in the Val-de-Travers — watchmaking. The merchants, who took lace to the ends of Europe, opened the trade routes for FLEURIER watches and precision tools made in the valley homesteads.

One hundred years later, the trade routes stretched to the ends of the earth. FLEURIER had 4000 inhabitants, 700 of whom were in watchmaking.

The Fleurisans — as they are called — were the first to take their precious cargoes of watches beyond Europe to the Middle East. The boldest were the BOVETS, who opened the Chinese market, taking the flowers of FLEURIER, preserved for ever in the exquisite enamel of BOVET watches, to the courts of emperors and mandarins. Opening branches in Canton and Shanghai, the BOVETS soon became one of the most sought after supplier, and “BOVET” became the Chinese word for a watch.

In the late 18th century, the centre of watchmaking was in Britain, where expanding maritime trade and naval power required precision timekeeping for accurate navigation.

It was therefore to London, the world’s watch manufacturing and trading capital, that Swiss watchmaker, Jean Frédéric Bovet sent three of his five sons in 1815. Edouard, the future founder of the BOVET company, was then just 18, and his intelligence came to the notice of his English employer. Three years later Edouard Bovet was on his way to Canton with a consignment of valuable timepieces. There the young watchmaker sold four of the watches to a mandarin for the incredible sum of 10,000 francs, thereby discovering his true talents as a salesman and the huge potential of the market.

With his two brothers in London, Alphonse and Frédéric, and his third brother Gustave, a watchmaker in FLEURIER, Edouard Bovet set up the BOVET watch company in 1822. The first watches, heavily influenced by the work of English watchmaker, William Ilbery, were made in London under the supervision of his brothers, while Edouard looked after marketing and sales. Soon production was transferred to FLEURIER, where working conditions were better, and his younger brother, Charles-Henri, joined the business.

By the time he was 33, Edouard Bovet had made his own fortune, that of his large family and boosted the prosperity of his native village. In 1830 “Chinese” BOVET returned in triumph to FLEURIER and set himself up in an imposing neo-classical mansion. The colonnaded building is today the town hall, and a road still bears his name.

On November 15, 1840 the Bovet brothers recapitalized the company at a massive one million francs. By now, astute salesmanship had gained BOVET an international reputation that far exceeded that of its rivals. All this had been achieved within 20 years.

Edouard Bovet changed the nature of the product, inventing accessible luxury by maintaining quality and reducing prices. He was the first to introduce transparent casebacks for clients fascinated by mechanics. The movements were richly decorated, and the fame of FLEURIER engravers surpassed those of Geneva.

The value of BOVET watches, each authenticated by signature, became trusted throughout the world. This early brand strategy built up a loyal clientele who would have no other make. In China, BOVETS were a favourite store of wealth, acting as a currency in times of instability. 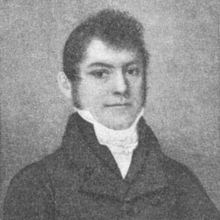 EDOUARD BOVET completes his watchmaking apprenticeship and leaves Fleurier with his brothers Alphonse and Frédéric for London, at the time one of Europe’s leading watchmaking cities and more importantly a major trading centre for clocks and watches. 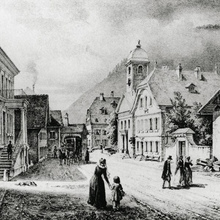 Edouard Bovet ends apprenticed to watchmaker and left Fleurier with his brothers Alfonse and Frédéric for so important London center manufacturing but mostly European watchmaking trade. 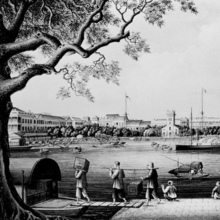 Edouard Bovet left London April 20 aboard the Orwell, ship of the “Compagnie des Indes”. He arrived August 16 in Canton where he sells very quickly four watches for the sum of CHF 10,000 representing the equivalent of one million dollars of today. 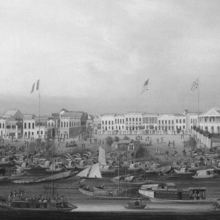 Edouard Bovet, residing in Canton, created with his brothers, Alphonse and Frederic stayed in London as well as with his third brother Gustave, watchmaker in Fleurier, a partnership aimed at the watchmaking trade with the China. The first Treaty of the BOVET company wrote to London made date of May 1. Faced with the rapid expansion of the business, the company transfers the center of its manufacture in Fleurier. 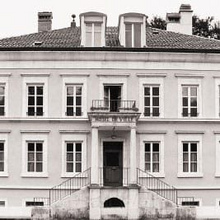 Construction of the House BOVET Fleurier commonly referred to as “the Palais de Chine”, which became in 1905 the town hall which is also the Foundation of the Fleurier quality which BOVET is a member founder. 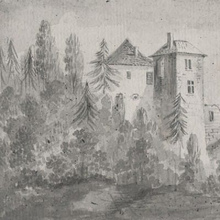 Môtiers Castle, built in the 14th century and dominating the Val-de-Travers and Fleurier, is sold at Henri-François Dubois-Bovet. His great-grandchildren will make donation in 1957 at the State of Neuchâtel. 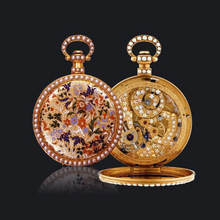 FRÉDÉRIC BOVET leaves London for Fleurier where he manages the firm’s watchmaking workshops, which at the time employed 175 people. 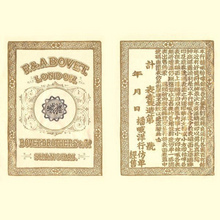 EDOUARD BOVET died in Fleurier at the age of 52. At this time, the Fleurier Watch had acquired a real monopoly in China. For a long time BOVET was synonym of watch for the celestial (Chinese people) and even a trade currency within the country. «(The watch Chinese;) A. Chapuis» 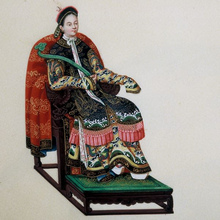 DURING the first universal exhibition held in Paris, BOVET wins the golden metal in the category ‘luxury’ for a pair of enameled watches commissioned by the Emperor of China. 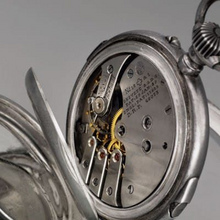 FRITZ BOVET, the eldest son of Alphonse, files a patent for a single push-piece chronograph equipped with a seconds-hand, minute-counter and hour-counter allowing measurements of up to 24 hours. This ingenious mechanism offered the possibility of using the chronograph as a second time zone. 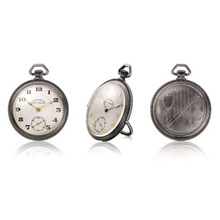 BOVET file patent for the Easel Watch, which allows to use the Pocket Watch as a table clock and the mono rattrapante chronograph patent is still today highly prized by collectors. 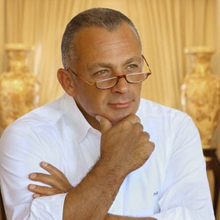 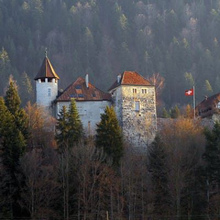 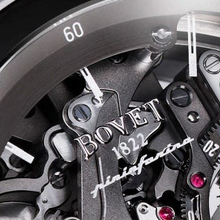 PARTNERSHIP AGREEMENT with the iconic Italian Design House Pininfarina for the aesthetic development of the sports collections. 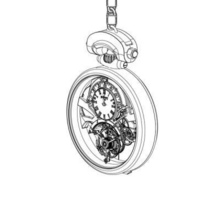 LAUNCH OF THE AMADEO® CONVERTIBLE CASE which allows you to transform your timepiece in a reversible wristwatch, table clock and pocket watch (or necklace watch) without requiring the use of any tool. 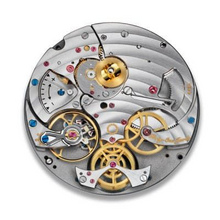 LAUNCH OF THE VIRTUOSO II watchmaking specialties caliber. The first movement not regulated by a tourbillon to be entirely developed and manufactured in the workshops of the House. 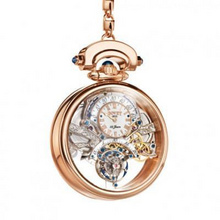 UNVEILING of the Braveheart®, 6 times patented watch, as well as the 19Thirty, both endowed with movements manufactured by the BOVET House